You won’t miss the mayo in this tangy German Potato Salad! Red potatoes, bacon, red onion, fresh dill, and a vinegar based dressing all make for this delicious twist to traditional potato salad! 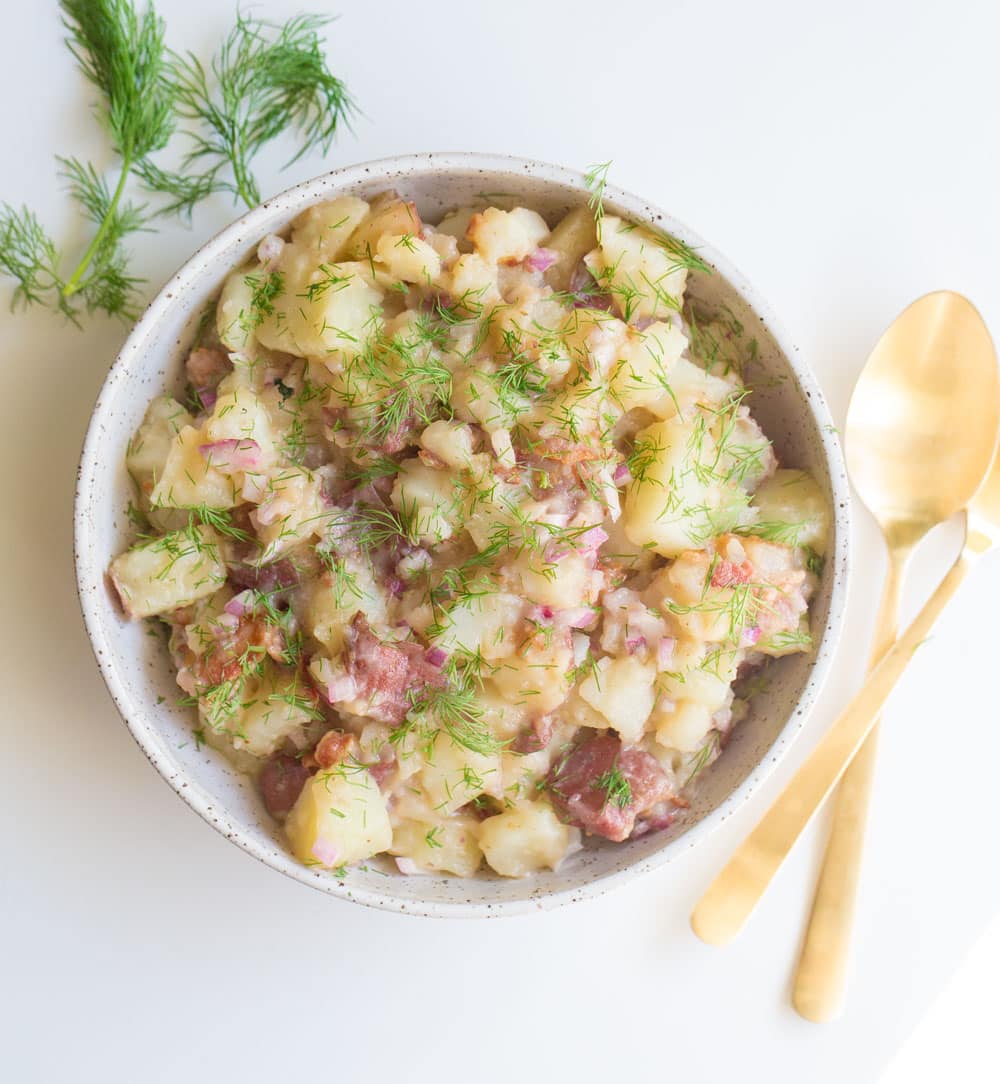 Living in Germany for 4 years, I have had my taste of some delicious German Cuisine. Some of it is a little too heavy for me, but for the most part, German’s do food right. Potato dishes in Germany are by far my favorite. Whether you get roasted skillet potatoes, gratin potatoes, or a delicious potato salad; they know how to fix some potatoes!

I am excited to give you my recipe for a German Potato Salad. But first, a little confession time. I actually used to really dislike potato salad because it had my LEAST favorite ingredient ever. Mayonnaise. Just typing it makes me nauseous. 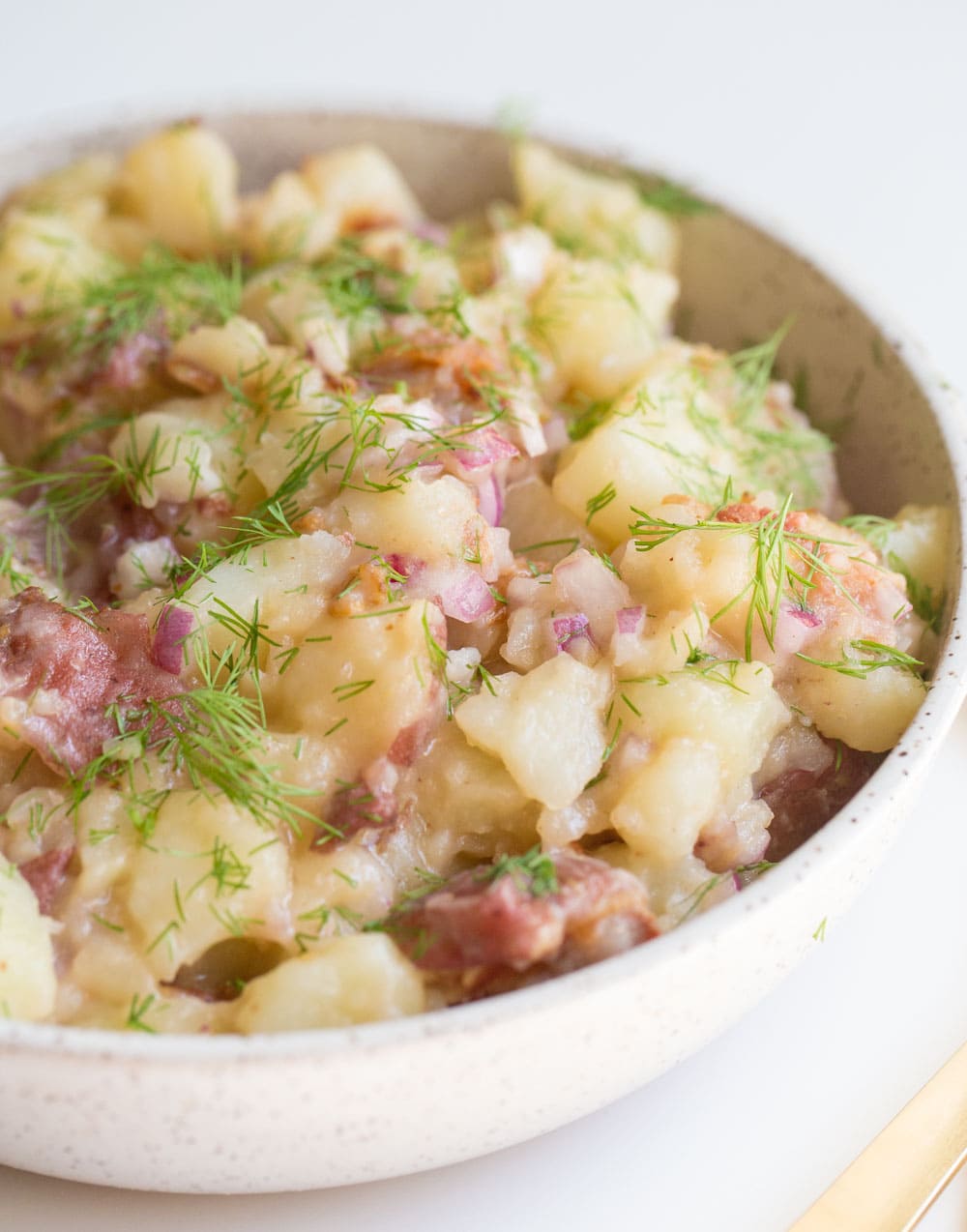 How to make German Potato Salad:

Gather up your ingredients:

To start you’ll need some 3 lbs of red russet potatoes. You can keep the skins on or off. As you can see here, I did a mixture of both: 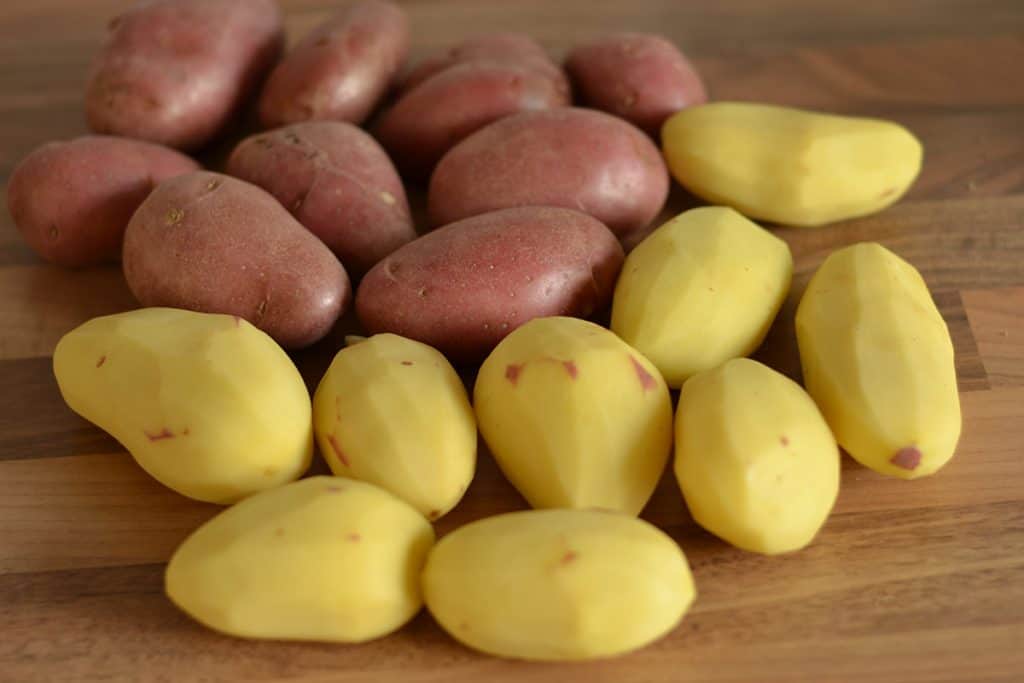 You’ll boil your potatoes, and start cooking up some crispy bacon at the same time. Once the bacon is finished cooking, set it aside to cool. You’ll chop up the fresh dill, red onion, and the bacon. 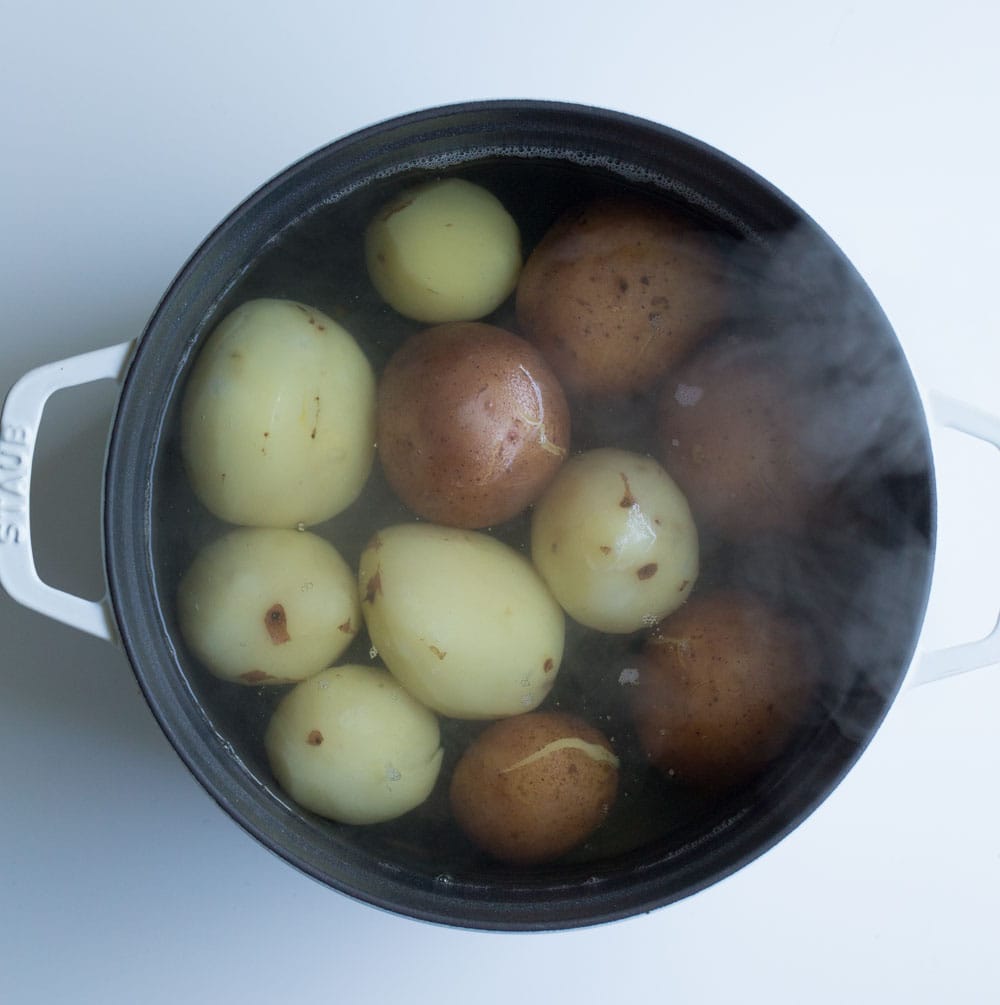 Now it’s time to work on the potatoes. Once they are soft, but still a little firm, you’ll remove the boiling water and dice them up. 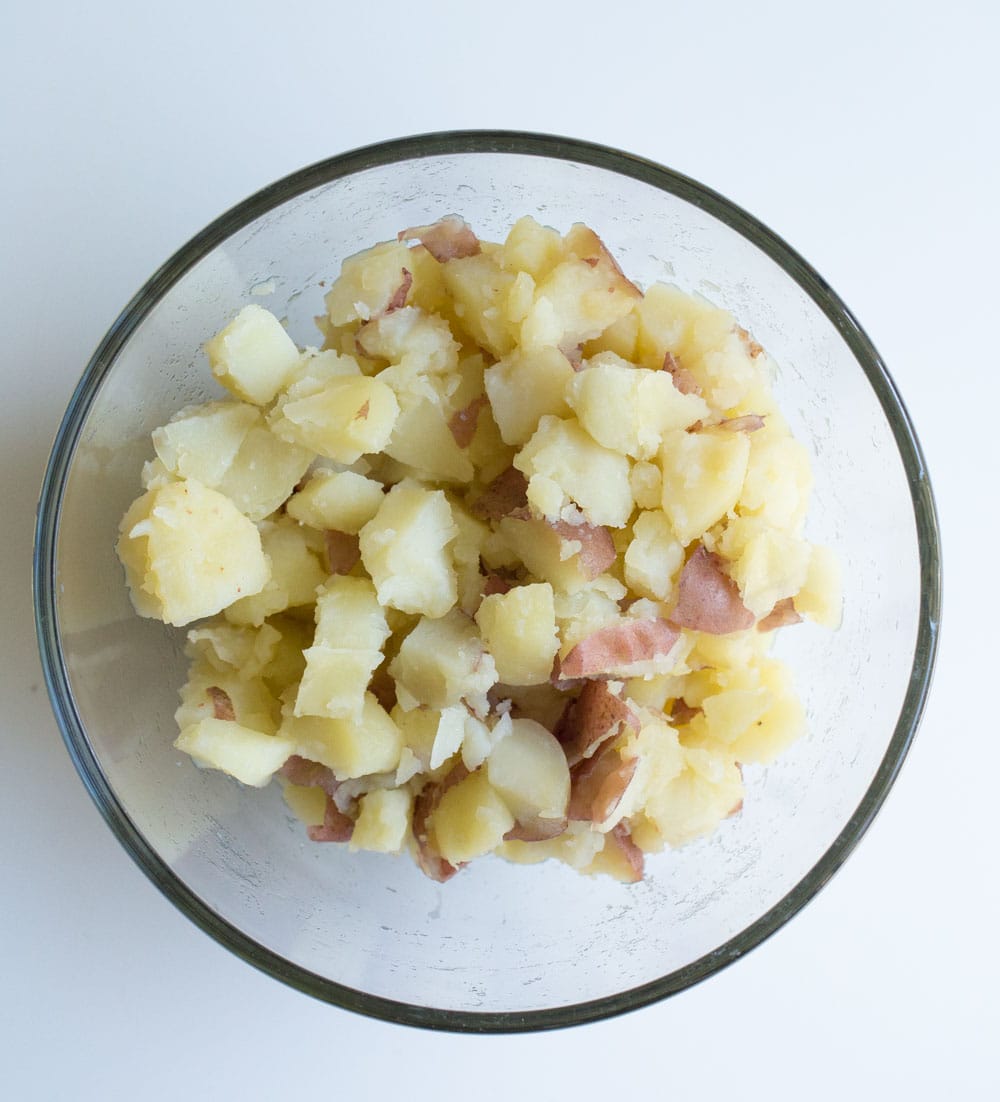 This next part is important, so listen up. While the potatoes are still warm, add in the rice vinegar. This allows the potatoes to soak up some of the vinegar to give it the tangy flavor I was telling you about. Allow that to sit for a few minutes, then add the chicken stock.

Next, add the remaining ingredients with the exception of the dill. Dill gets tossed in last. You’ll refrigerate to cool down. This salad actually tastes better after it has set for awhile. If you can make it in the morning to serve at night, awesome. Or make it the night before. I always love the way it tastes the day after I make it! 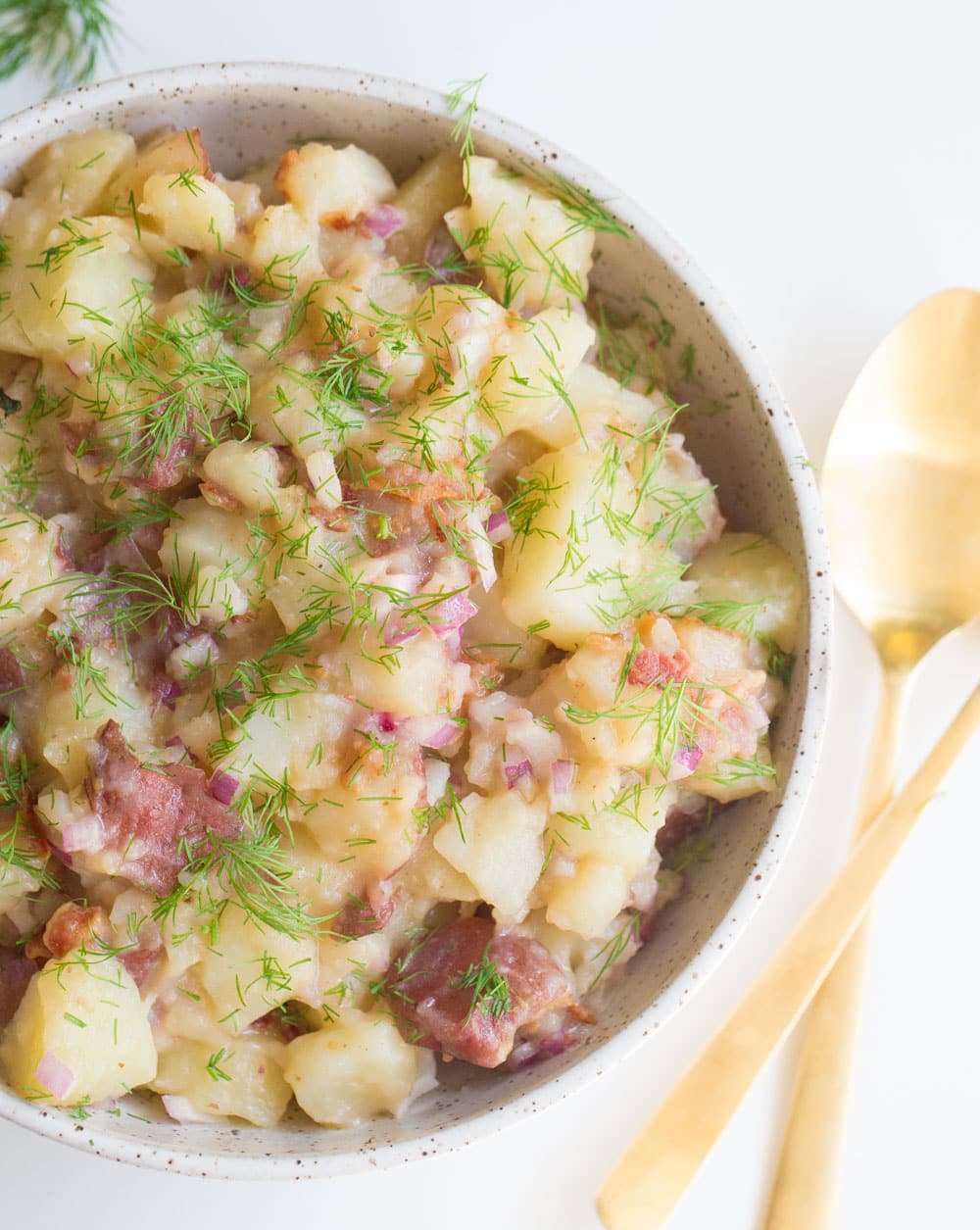 Just a random side note: I know of several people who assume that German Potato Salad means potato salad served warm. I have never had potato salad in Germany this way. Maybe it happens in another region, but it is mostly served cold. 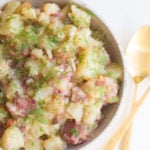 This recipe can be made the day or night before. It actually tastes better the next day!

I’m Amy, foodie, nutritionist, recipe developer, wife, and busy mom of 2. I am on a mission to create everyday nutritious recipes that taste absolutely DELICIOUS!!! I love comfort food with a healthy twist. Follow me as I share the simple meals I make for my family. I’ll make meal planning easy by telling you exactly what we eat every week! END_OF_DOCUMENT_TOKEN_TO_BE_REPLACED