Skillet Cherry Crisp has all the elements of the perfect summer dessert! Deliciously sweetened with cherries, a robust flavor from the skillet, and a crunchy topping for the yummiest texture. Recipe is grain-free, Paleo, and loved by all! 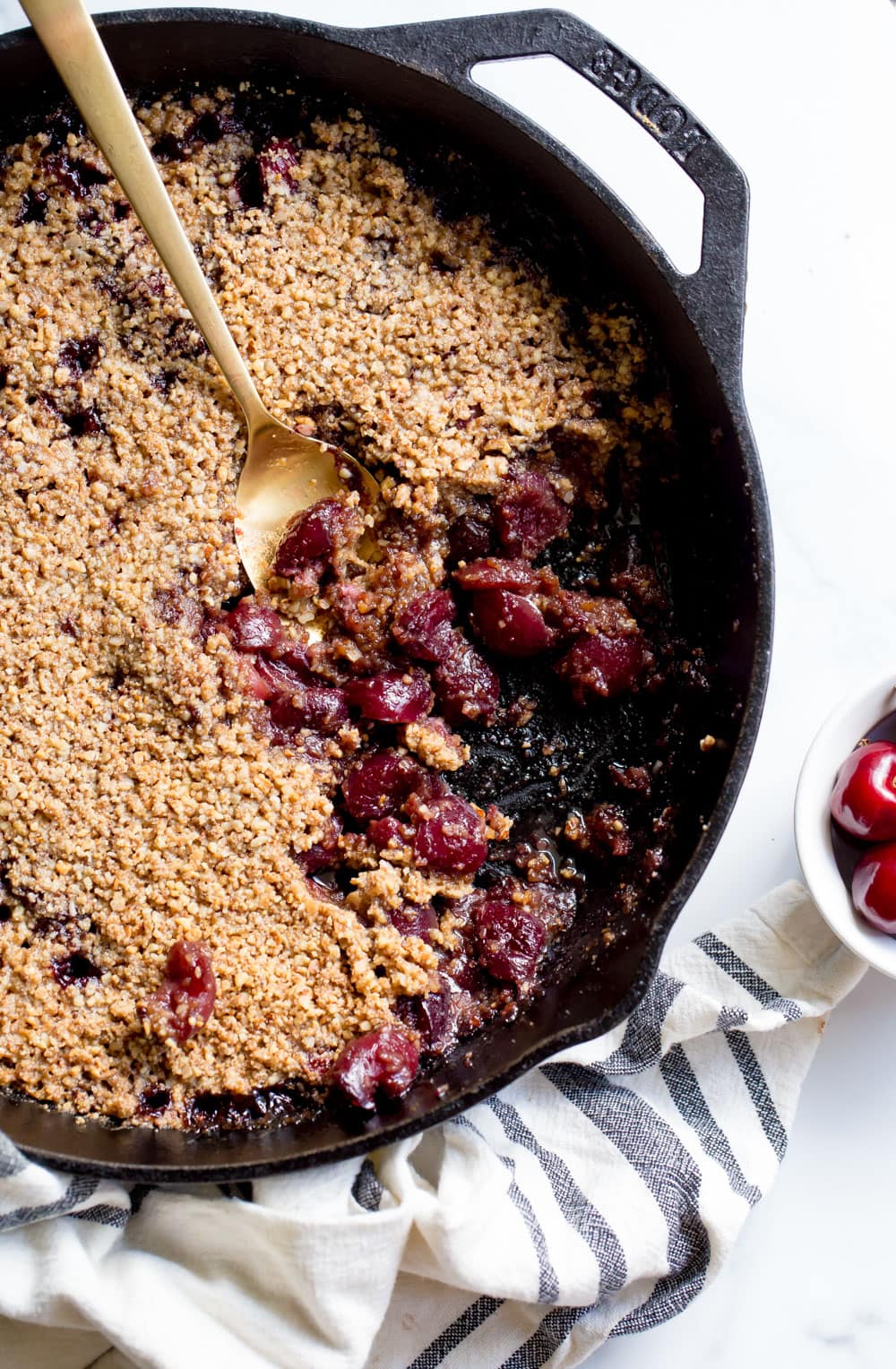 They are HERE!!!! Cherries have officially hit the stores and farm stands, and this girl couldn’t be more thrilled. I am not much of a fruit girl, but something about the summer has me diving head first into the produce section with all of my favorite tastes of summer: cherries, berries, peaches, plums, and melon!!

With my most recent trip to the grocery store, you better believe I stocked up with pounds of cherries. This easy snack is my version of candy!! With my purchase of at least 3lbs (I knew they would go fast), I headed home and started dreaming up all the ways I wanted to eat these cherries. Dessert was at the top of my list.

I decided to celebrate the arrival of cherries with either a crisp or cobbler, with a simple dessert that is all about the fruit itself (and who are we kidding, the topping too!) I knew the skillet would make the perfect cooking vessel so I could get an even more rich and robust taste. And when you Instagram friends sealed the deal and preferred the cherry crisp, I went right to work. 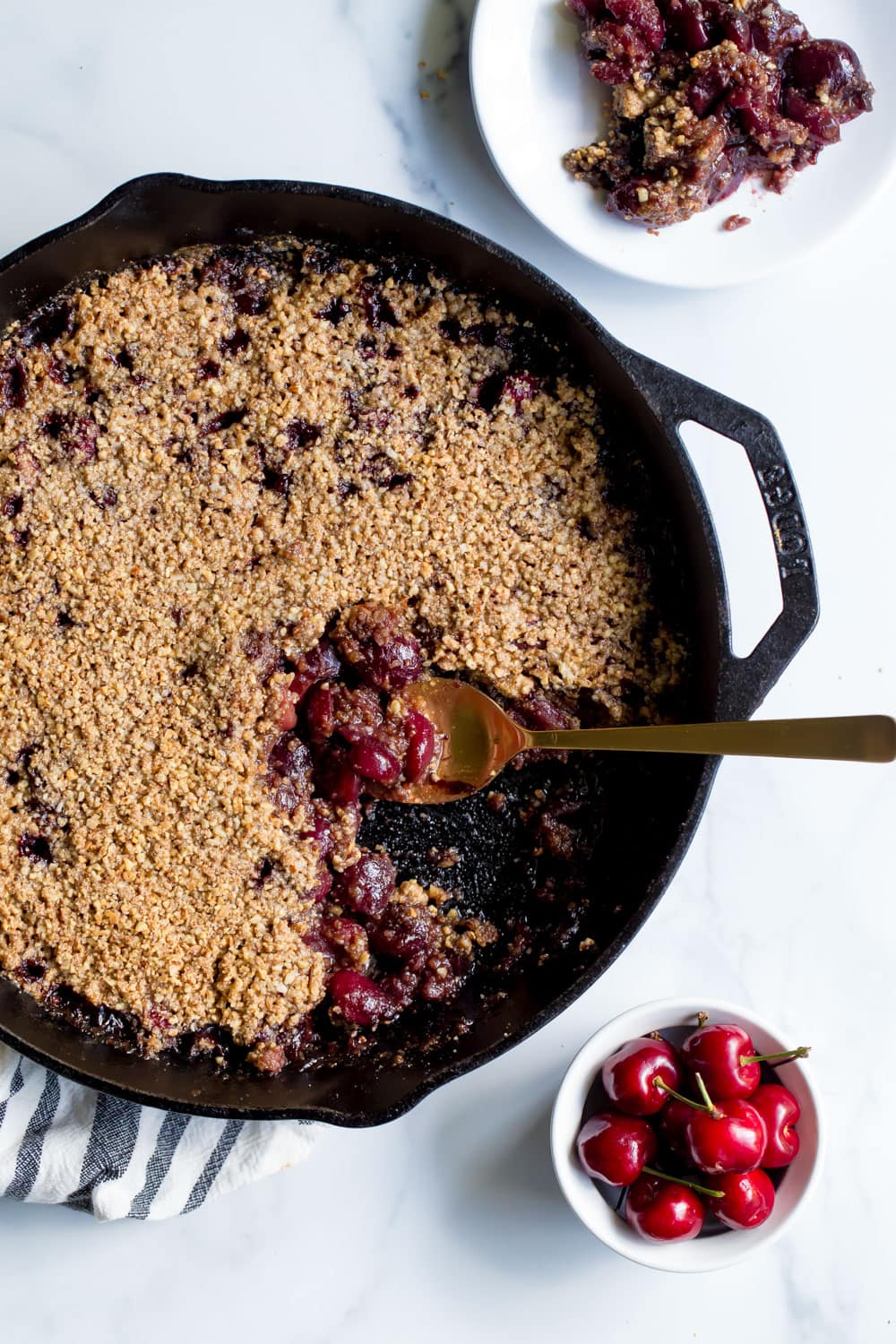 How to make Skillet Cherry Crisp:

This dessert focuses on REAL fresh cherries. Not to be confused with canned or jarred cherries that are loaded with sugar. I promise, the fresh cherries will make the absolute BEST tasting dessert!

I used about 2lbs in this recipe (between 5-6 cups), I pitted and halved them using a cherry pitter (a fantastic tool if you don’t have one). 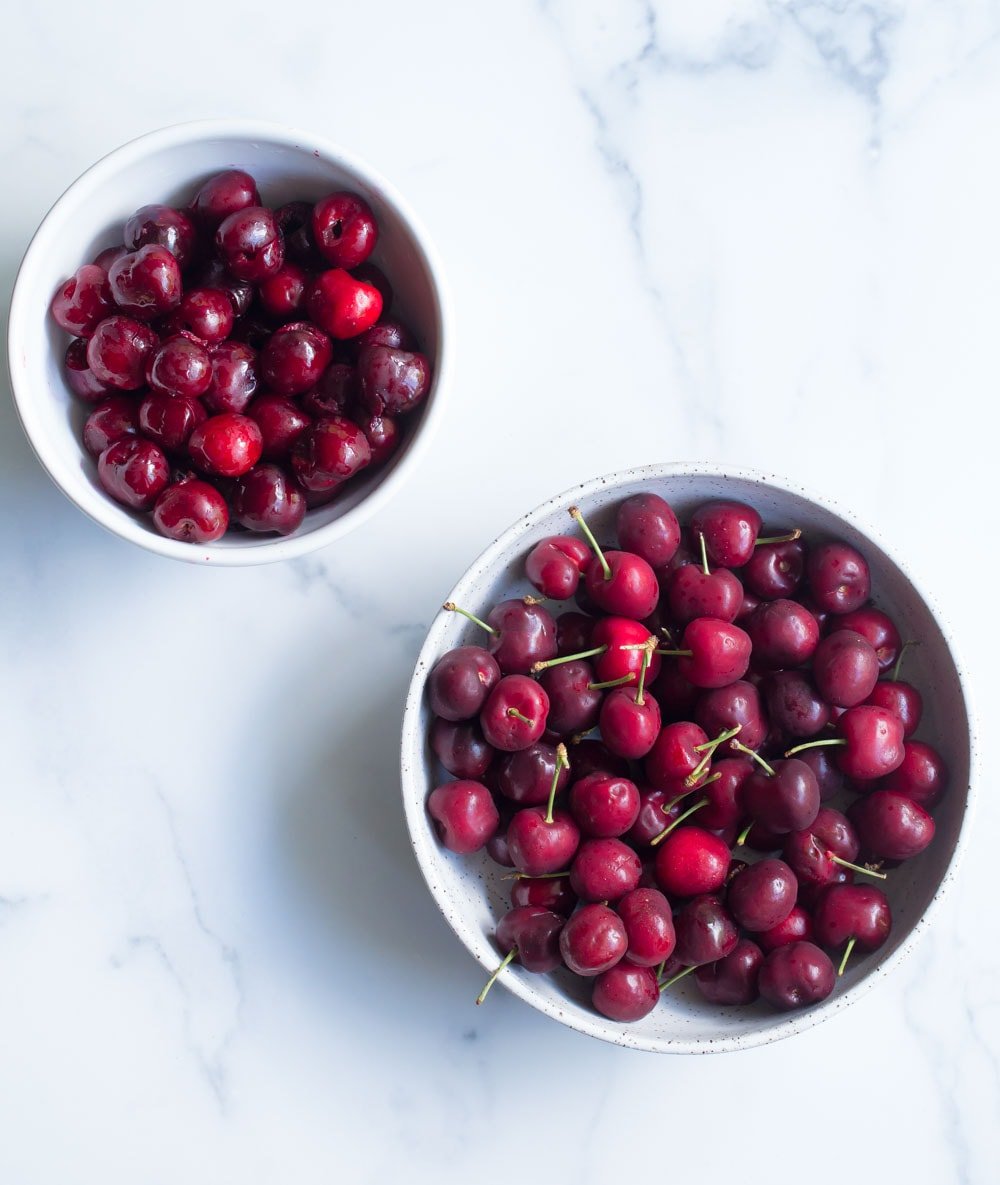 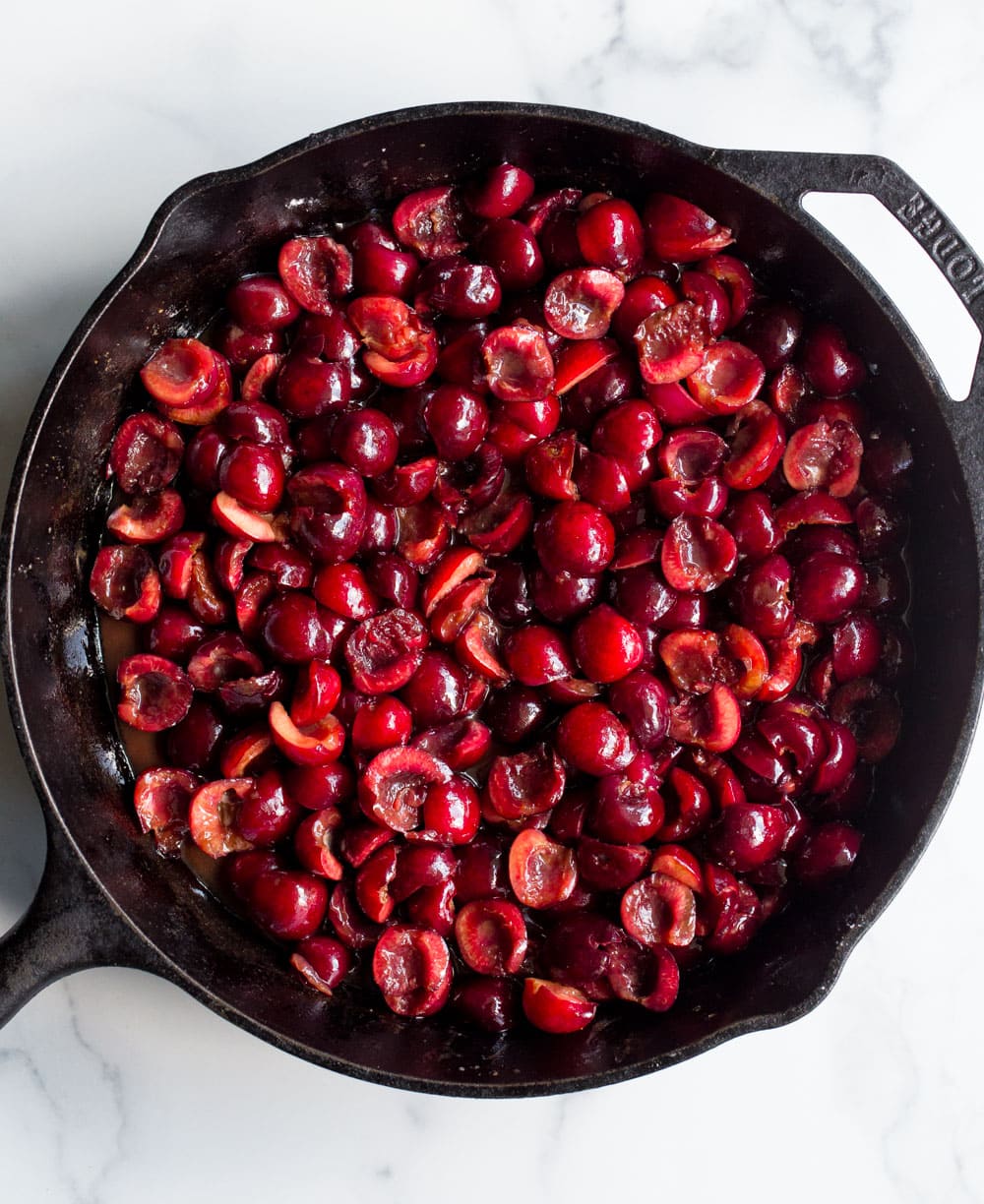 Stir in vanilla extract, coconut sugar, and arrowroot starch. Toss gently. Make the crisp topping by pulsing almonds, shredded coconut, coconut sugar, almond flour, coconut oil or butter, and cinnamon in a food processor. Once crumbly, toss on top of the cherries in the skillet. Transfer the skillet to the oven. Bake for 40-45 minutes, or until mixture is bubbly and topping is golden brown. 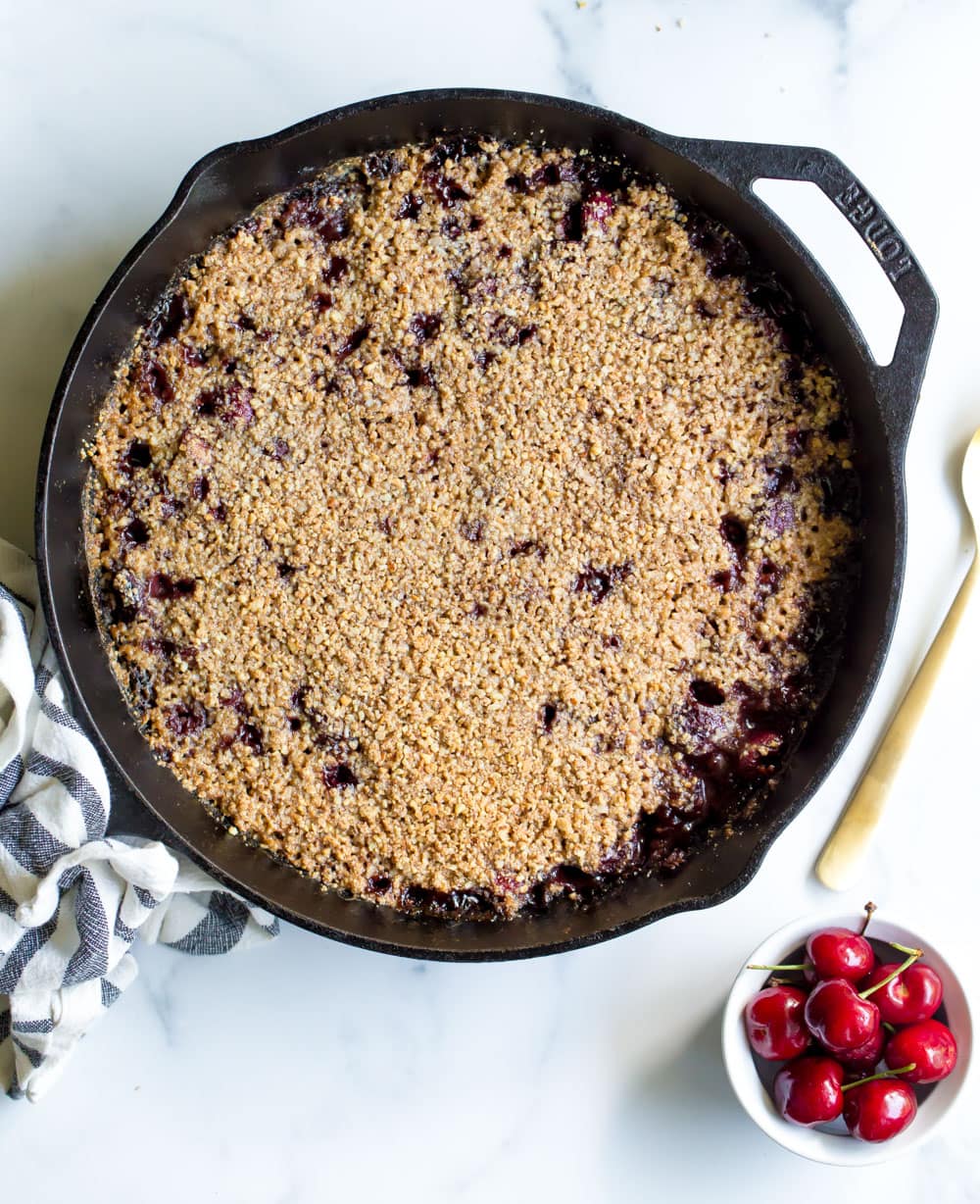 Let sit for a few minutes to cool. Serve at room temperature or warm! 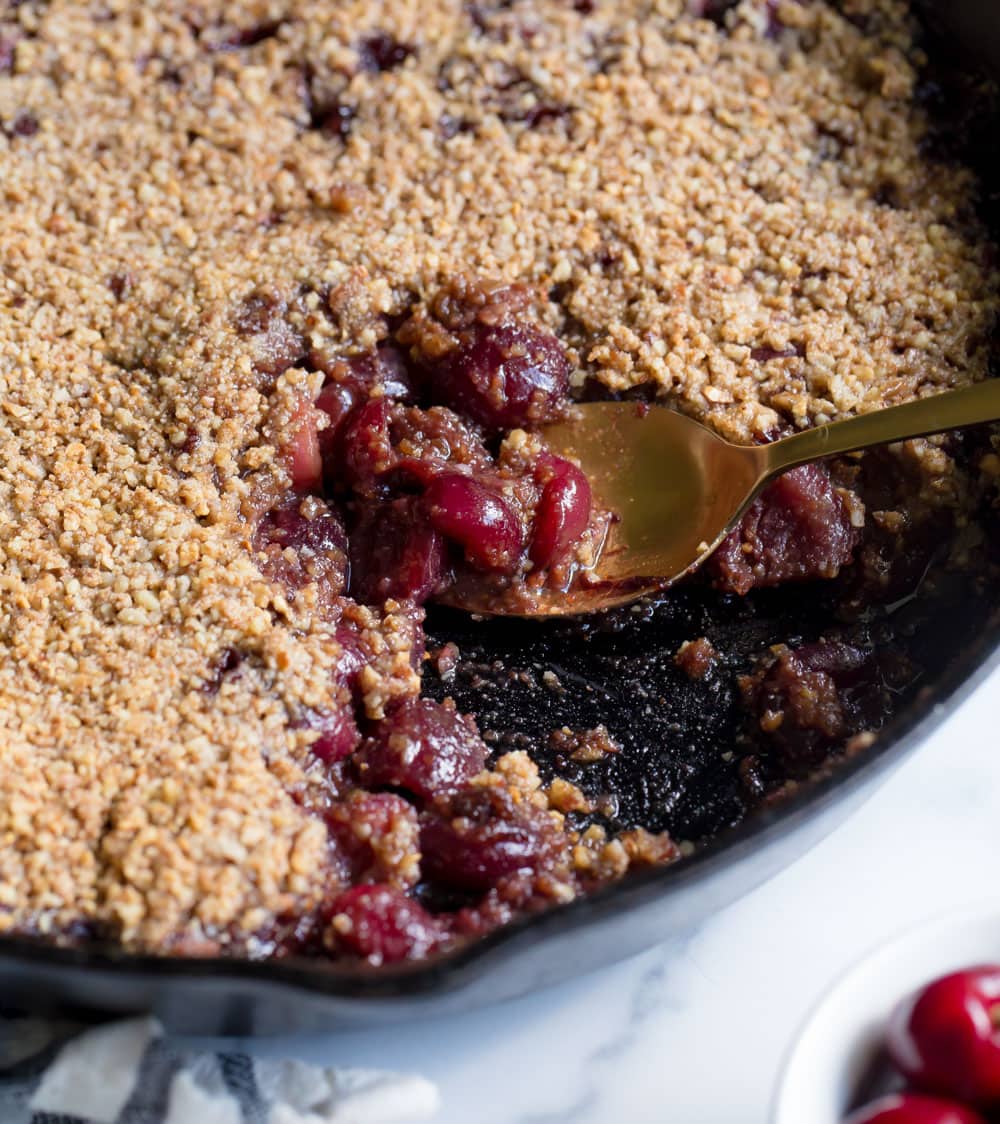 To store, simply refrigerate. Once ready to serve the leftovers, warm up in the oven or microwave. 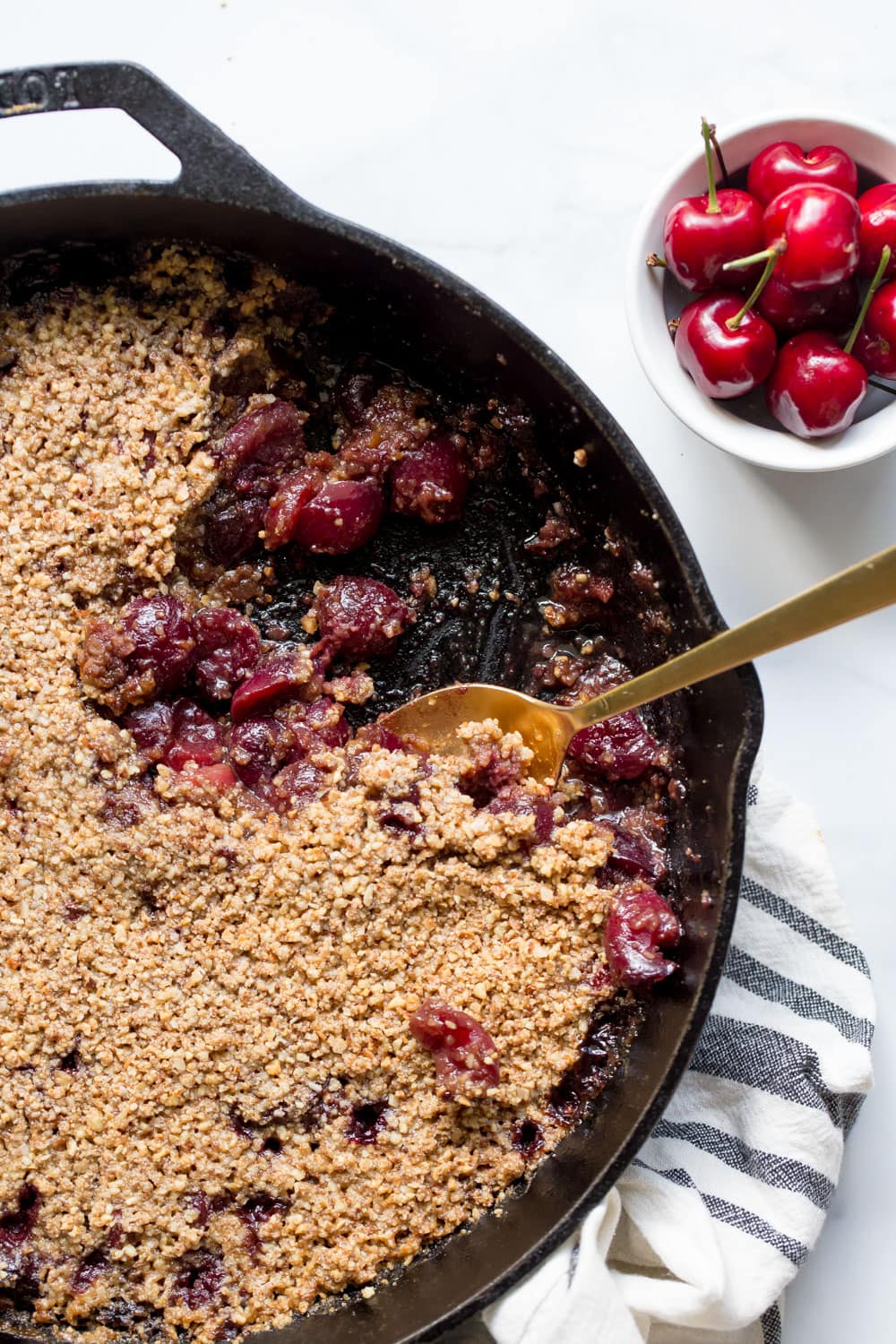 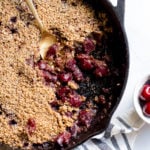 For the cherry filling:

For the crisp topping:

*Can use pecans and walnuts in place of almonds. Or any combination of those 3

I’m Amy, foodie, nutritionist, recipe developer, wife, and busy mom of 2. I am on a mission to create everyday nutritious recipes that taste absolutely DELICIOUS!!! I love comfort food with a healthy twist. Follow me as I share the simple meals I make for my family. I’ll make meal planning easy by telling you exactly what we eat every week! END_OF_DOCUMENT_TOKEN_TO_BE_REPLACED