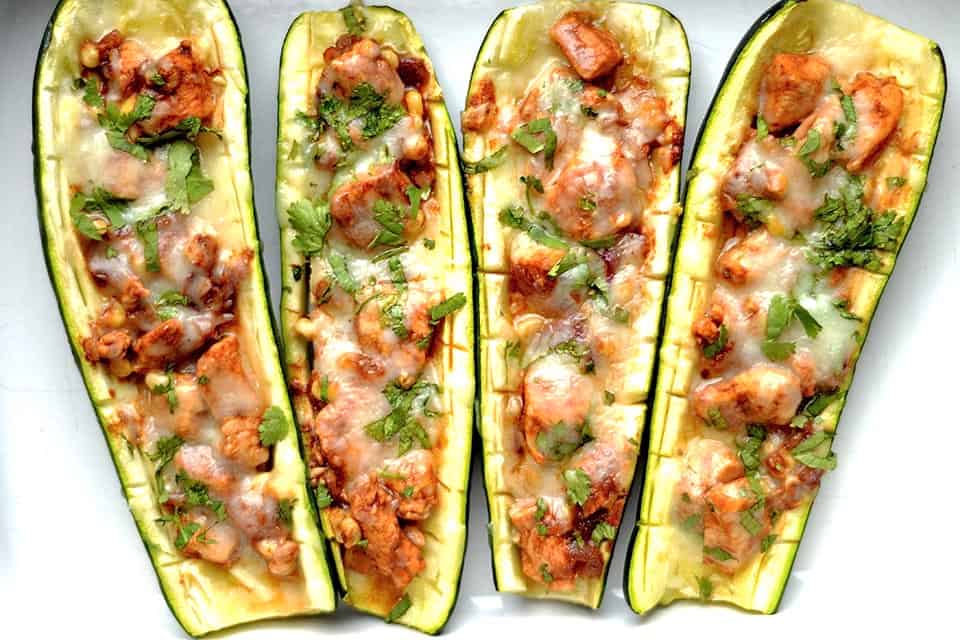 BBQ Chicken Pizza Zucchini Boats have all the same flavor as a yummy pizza without the guilt! A twist on the classic pizza recipe with zucchini to pack in those daily veggies.

Have you jumped on aboard the zucchini boat train yet? I was skeptical at first, but only because I have little mouths to feed that aren’t all that crazy about zucchini. But guess what? They are awesome. And what I’ve come to realize is that it’s all about the toppings. I have forever loved a BBQ chicken pizza. Garlic, Melted cheese, BBQ Chicken, onion, and cilantro can just about sell anyone. We often do pizza night on Friday nights, and I wanted to bring about a GF version that the family would enjoy. 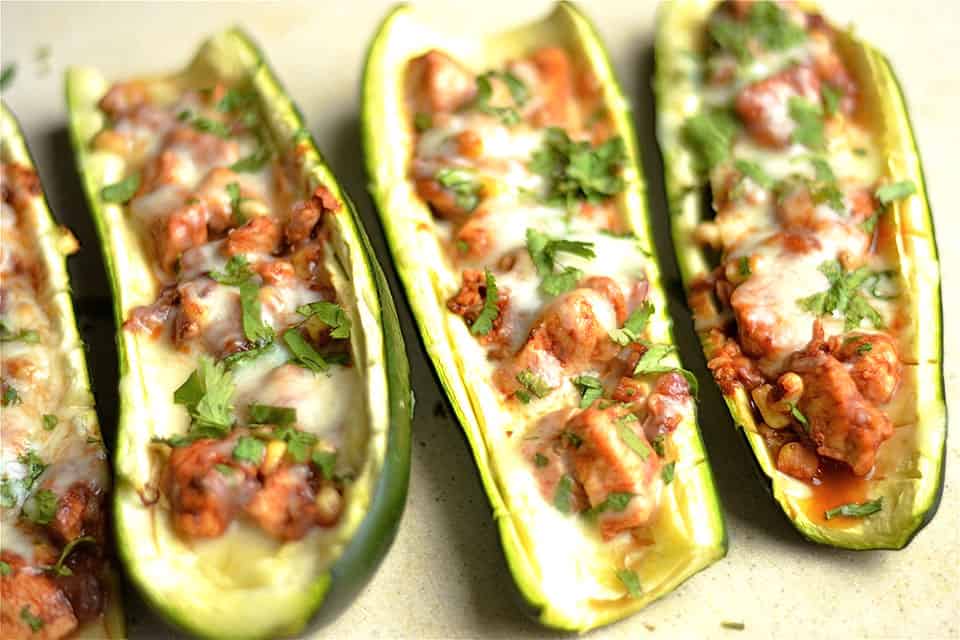 So they were also a pretty simple dinner to make. You do need to start by roasting the zucchini first in the oven, otherwise the zucchini is not cooked properly. Also, make sure to get extra wide zucchini. I found some great ones at Trader Joe’s the other day that worked perfect for this recipe. Skinny zucchini won’t allow you to stuff as much. Hallow out the zucchini by making slits and cutting out the center. You will leave a thin rim around outside so they don’t fall apart. Brush with olive oil and garlic: 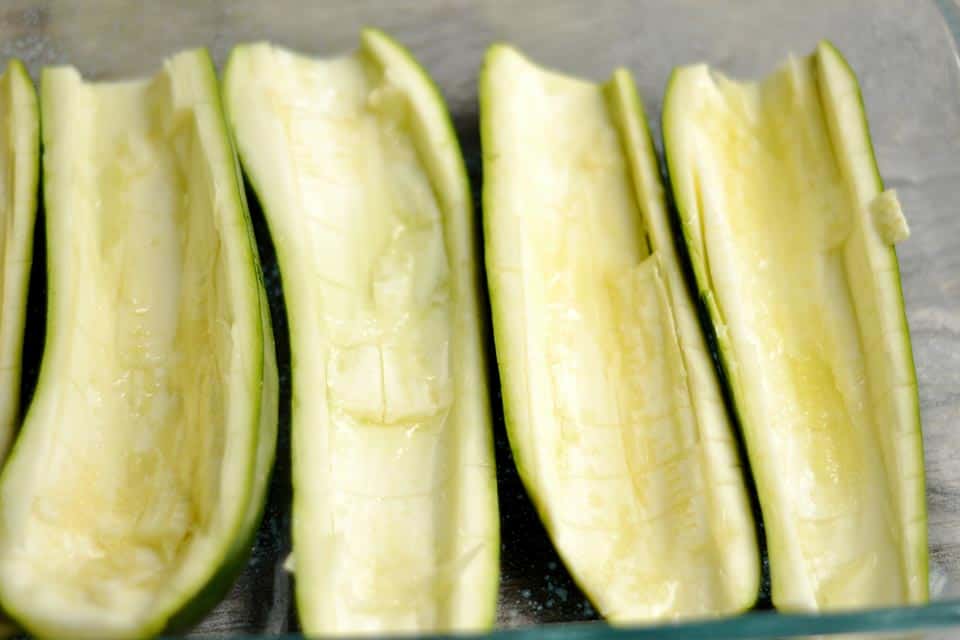 While the zucchini is in the oven, cook your chicken. I chopped my chicken into small pieces (about 1/2 inch diameter), and cooked in a skillet. When the chicken was almost ready, I tossed in corn and red onion. Then, coated all of the mixture with BBQ sauce. After 20 minutes, pull the zucchini out of the oven and stuff them with all the goodies: 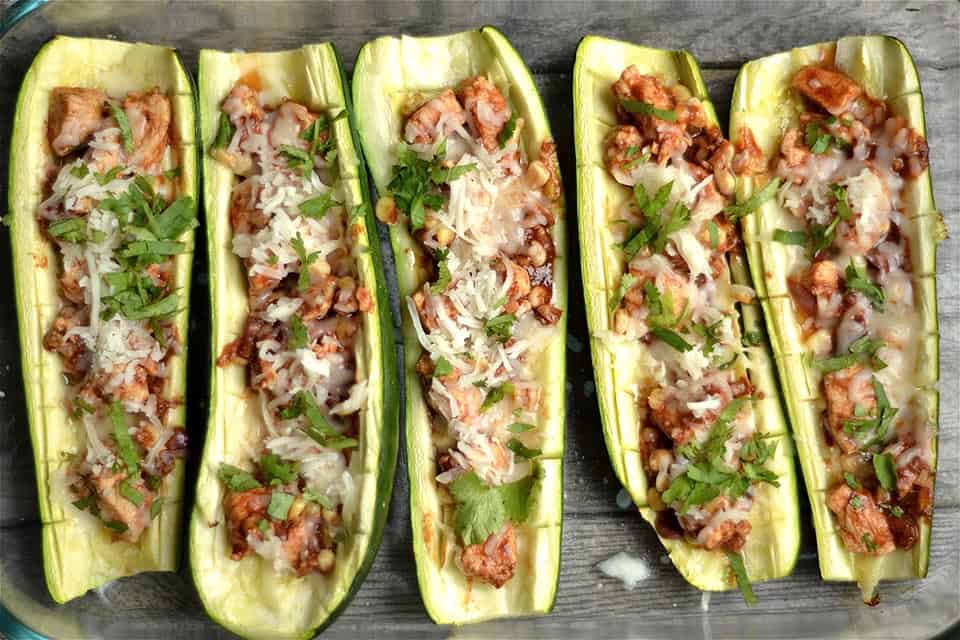 I added the BBQ chicken mixture, sprinkled with mozzarella cheese, and topped with fresh cilantro. Bake for another 8 minutes, and they are ready to eat! Best served hot, right out of the oven!

Kid friendly tip: My kids tried these and liked them okay, but preferred real pizza. I had plenty of BBQ chicken mixture left after making 6 zucchini boats. I used the leftovers to place on dough so they could have both the pizza and some of the zucchini boats. You could also use ciabatta bread in place of pizza dough!

I like Sweet Baby Ray's brand for a GF version of BBQ Sauce.

I’m Amy, foodie, nutritionist, recipe developer, wife, and busy mom of 2. I am on a mission to create everyday nutritious recipes that taste absolutely DELICIOUS!!! I love comfort food with a healthy twist. Follow me as I share the simple meals I make for my family. I’ll make meal planning easy by telling you exactly what we eat every week! END_OF_DOCUMENT_TOKEN_TO_BE_REPLACED