Mexican Stuffed Peppers make a fantastic dinner any night of the week! So versatile, and one that the family will absolutely love. They are topped with a Lime Cashew “Sour Cream” that tastes amazing on Mexican dishes! You can make this easy recipe in the oven, Slow cooker, or Instant Pot for ultimate ease! Paleo, Whole30, and Keto.

Another day, another way to spice up Taco Tuesday! Here is the story behind these. My family absolutely LOVES taco Tuesday. They look forward to it every week. Last week we did chicken tacos for dinner, and if being completely honest, they prefer ground beef. They know I like to vary up the way we make tacos, so it wasn’t too much complaining. BUT, I surprised them a few days later by including a “Mexican” themed stuffed pepper recipe to the menu, and they were over the moon happy! It was basically tacos two times that week. Winning those mom points for sure.

Normally when I have made stuffed peppers, I’ve done an Italian version. So this one was a super fun way to mix it up. And that cashew “sour cream”? Such a fun addition!

So let’s discuss some basic things you should know about this recipe.

For the Slow Cooker or Instant Pot:

We are still going to follow the same directions as we did to prepare the stuffed pepper filling. The biggest difference is the way we cut the peppers. You will want to remove the top, and use the bell pepper like a cup. Place the filling inside, and then place inside your slow cooker or Instant Pot.

If using the Instant Pot, you will need the trivet, and place water under the trivet so that the recipe can come to pressure. If adding cheese, top with cheese AFTER you are done cooking.

As mentioned above, my favorite part! We’ll soak cashews in boiling water for at least 15 minutes (alternatively you can soak overnight in water). Drain the water, toss into the blender or food processor with a pinch of salt, water, lime juice, vinegar, and 2 tsp of nutritional yeast. You can also add in some cilantro if you love it as much as I do. Blend up until smooth!!

These refrigerate and re-heat well. You can also freeze, thaw, and re-heat.

Hope you all LOVE!!!

Mexican Stuffed Peppers are a low-carb way to enjoy Taco Tuesday! You'll love how easy these are, and the dairy-free lime sour cream on top. 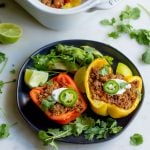 For the Stuffed Peppers:

*To make cauliflower rice, chop the florets of half of a large cauliflower head. Pulse in a food processor or blender until it resembles a coarse “rice” texture, but before it gets mushy!

**For the slow cooker, be sure to remove just the top of the peppers and scoop out the insides. Follow the same directions for making the filling. Place each bell pepper “cup” inside the slow cooker so it’s standing straight up. Cook on low for 3-4 hours.

***For the Instant Pot, follow the same directions as the slow cooker. BUT, place the trivet inside the IP, and place one up of water in the pot. Let the peppers stand up in the IP, and set the IP to manual. Cook at high pressure for 5 minutes, then use a natural release.

I’m Amy, foodie, nutritionist, recipe developer, wife, and busy mom of 2. I am on a mission to create everyday nutritious recipes that taste absolutely DELICIOUS!!! I love comfort food with a healthy twist. Follow me as I share the simple meals I make for my family. I’ll make meal planning easy by telling you exactly what we eat every week! END_OF_DOCUMENT_TOKEN_TO_BE_REPLACED