This warm and cozy Pumpkin Apple Chia Porridge is the perfect fall breakfast! Packed with spiced pumpkin flavor, fiber, and healthy fats. Make ahead on the weekend, and enjoy all week for an easy breakfast! Recipe can be made in the Instant Pot or Stovetop for ultimate ease.

With the first hint of fall two weeks ago, I dove head first into this cozy breakfast. The pumpkin and apple welcomed me with open arms; it’s one of my absolute favorite combos! My Pumpkin Apple Breakfast Bake still remains a reader favorite, I thought I would set to work creating a chia pudding variation.

Chia pudding has been a part of my breakfast or snack routine for over a year now. As a nutritionist, I love the additional boost of fiber, healthy fats, and protein, and really love playing with so many fun flavors!

Gather up these simple ingredients:

With the Instant Pot you will toss in the following ingredients: 2 cans of full fat coconut milk, canned pumpkin, 1 large honey crisp apple, pumpkin spice, cinnamon, and maple syrup. Let it cook on manual, high pressure, for 1 minute. Then we use a quick release. Once removing the lid, stir in the chia seeds and let sit for 15 minutes before serving warm. That’s it!!

It should be known that I had to make this porridge several times to get it right (no worries because I still ate up all of the practice rounds!). I did try the Instant Pot a few times and got the burn signal, but was able to also successfully do it this way one time.

Although you could roll the dice and place the chia seeds in the IP to let it come to pressure, it actually works better to add them after you remove the lid.

For the stovetop, we will let the same ingredients come to a rolling boil, reduce heat, then add in chia seeds. The stovetop variation requires a little more hands on, but cook times are the same.

More easy breakfasts you will love!

This creamy bowl of goodness is reminiscent of oatmeal without the grains! Packed with healthy fats, and protein for a simple hearty breakfast. The pumpkin taste is so perfect for fall. 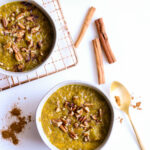 For the Instant Pot:

*I use honey crisp apples in this recipe

I’m Amy, foodie, nutritionist, recipe developer, wife, and busy mom of 2. I am on a mission to create everyday nutritious recipes that taste absolutely DELICIOUS!!! I love comfort food with a healthy twist. Follow me as I share the simple meals I make for my family. I’ll make meal planning easy by telling you exactly what we eat every week! END_OF_DOCUMENT_TOKEN_TO_BE_REPLACED